I met Israel Alba in his office in Madrid, where we had the opportunity to exchange thoughts about the crisis of the urban solid waste that invests contemporary city both at landscape and architecture scale.

SM Since 2003 you were involved in project concerning waste and recycling. One was a landscape regeneration of the Valdemingomez landfill in Madrid and the other one is a waste treatment plant in Valencia. Can you tell more about this two projects and the approach behind them?

IA The project for the recovery and transformation of the Valdemingomez landfill in Madrid required the application of complex environmental engineering processes, as well as new architectural strategies. Today, it is a place which can be incorporated, with full guarantees, into the city structure, as long as it is viewed as a monumental public space. It is recovered ground which is capable of becoming a new, free metropolitan space that can respond to the current and future needs of society, especially if it remains as such over time. The architectural project which was undertaken involved the proposal of new strategies for creating an area which will be open, flexible and dynamic throughout time, in a search for equilibrium between city and nature.

The Valdemingomez landfill constitutes an example of a proposed model of continuity between the forest and the surrounding area; a pseudo botanical garden with indigenous species seeking integration into the Parque Regional del Sureste (Southeast Regional Park). It was transformed into a free, public area with pedestrian paths and bicycle lanes, along with woods and wetlands which have helped to create small, localized ecosystems. Within it, one can observe the life of both nature and the city.

Regarding the second project, the Waste Treatment Plant (WTP) is located on the outskirts of the city of Valencia, close to the airport. It is set against fields and orchards carpeting the landscape in shades of ochre and green, offering the typical image of fertile farming land with the benign Mediterranean climate. 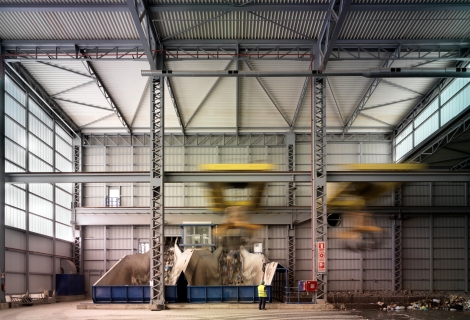 The project was conceived as creating a public facility rather than as merely a socially necessary utility. It includes a visitor’s center and an education area, to make the energy and environmental possibilities of the plant visible to citizens, so they can become more aware of their own involvement in managing our waste matter.

It is a place for studying, understanding and contemplating contemporary society, as a kind of observatory.

The elements of the facility’s surroundings, its topography, scale, colours and textures, serve as a source of inspiration. At the same time, the design has to rigorously fulfil a complex functional programme with strict constraints. In this context, we did not feel it was necessary to use either the shape or the design to reveal the content and use of the project. We wanted visitors to be able to discover a monumental, mechanised and highly industrialised interior, with silent conveyor belts endlessly displacing tonnes of waste.

The solution is based on a simple idea, providing unity to the whole, establishing an intense relationship between landscape and technology. The outcome is a compact volume. To emphasise the compactness, the design integrates the general service area and the visitors centre within one single industrial facility.

SM Which were the main challenges in designing both projects?

IA These two projects have confirmed that the limits have been diffused and that we are operating on a metropolitan scale in the territory. They have confirmed that we are mindful about everything and that everything requires mindfulness, both the city and the landscape; that is if the two are not already one and the same. We need and inhabit the planet as a whole, not only the cities, and therefore these cases reveal a clear and rapid evolution. They also reflect the commitment of contemporary architects, of man and of our society to the addressing of the problem of waste generation and the contamination of our environment.

SM With your concept CAN – Capability Architecture Notion you express not only a technical vision of architecture, but also an approach that looks to the human and civic side. How this is a part of you profession and in general in contemporary architecture?

IA Our vision believe that architecture can change things (and also can trigger growth, can teach, can empower, can improve, can solve…).

We strongly believe that architecture should not make problems; it must solve them. Whether they be engineering, environmental or human problems, we must work on it to make things easier. We also aim at a skill set that does not renounce the artistic dimension but incorporates it as part of the enhancement process. This is our notion of an architecture that makes things possible. Consequently, we have adopted the leitmotif “architecture can”.

SM Your experience with waste issue is present in your practice with seven projects, part of a wider design platform called Waste Lab Can, focused on build bridges between theoretical research and practical issues. How you started to work on waste and what is your main statement at this moment about it?

IA In our office, we deal with the contemporary city as a complex, variable phenomenon and embraces its continuous transformation as a positive, optimistic process. Through our operating platform WASTE CAN LAB, our architecture focuses on the issue of waste and possible solutions.

Our first project related to waste was the recovery and transformation of the Valdemingomez landfill in Madrid into a new Forest Park. My office was invited to participate in the competition and we won it. Within this project, we also had the opportunity to transform the first waste treatment plant built in Madrid into a contemporary and new environmental technology center dedicated to waste research.

From the very first moment, I understood that a new field was in front of me, where architects had a lot to say but, paradoxically, we don´t think about it as the heart of the matter of our discipline. At this moment, I believe that all this “new concern” allows us to address the matter of landscape in a broad way, without restrictions, and with a great degree of flexibility in the new proposals which come about because of these concepts.

SM You also teach as associate professor at Universidad Pontificia de Salamanca – Campus de Madrid (UPSAM). The waste topic is part of your educational program? If yes, how is it developed?

IA Waste is an important part of my educational program. Every year we discuss about it, I think that students must be aware of it, think about it. We introduce this topic as a part of the academic project every semester, understanding that through the waste and its relation with the city and the environment, the society establish new relationships between public and private and create a new conscience about life, sustainability, energy and landscape. Two years ago, we worked in Venice (we were invited to participate in La Biennale) and we designed “The island of energy”, where students had to deal with a waste treatment plant, a waste-water treatment plant, a facility for district heating and cooling, an energy research center and a researchers residence (including a public space out of waste) and think about the waste collection system for the city. It was really interesting. 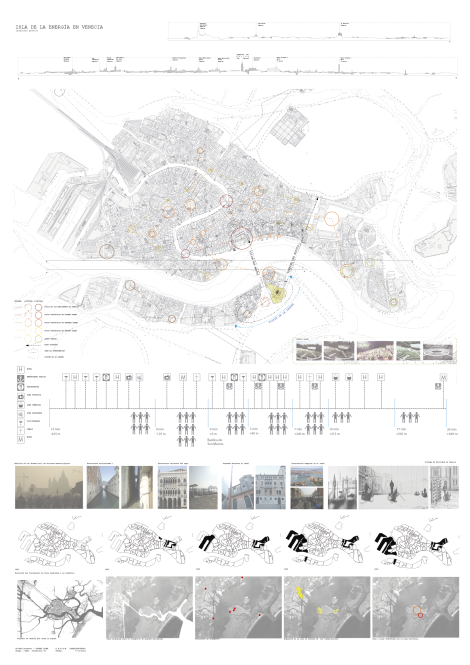 SM Waste is treated from a landscape perspective in your PhD dissertation. Can you describe your research path and the main achievement of it?

IA We are dealing with an old problem which, in recent times, has taken on a new dimension due to the type of waste and the amount generated. Cities’s first concerns in resolving these problems gave rise to the establishment of areas or specific places for the accumulation of urban waste: landfills.

Consequently and necessarily, I want to demonstrate that it is possible to recover and transform these urban waste landfills (areas of deterioration) once they have been abandoned and that they can give rise to new strategic public areas in contemporary cities. They are areas of opportunity, monumental vacancies produced by an architectural reactivation of the landscape, which is achieved using complex processes of environmental engineering. But the solutions applied to urban waste landfills throughout the 20th century have used engineering exclusively in the attempt to resolve the technical aspects. This is a worn-out model which can no longer handle the magnitude which the problem has attained and therefore, there is an inevitable need for the participation of architecture, which can open new lines of research and action.

In these first steps into the 21st century, there is a “new” concern, a “new” interest in the paradigms of environmentalism and sustainability. There is also a philosophical interest (which assigns the new value of ‘resource’ to waste) and all is aimed towards the concept of an open landscape, unlike the previous, more static models, and the intention is to recover picturesque ideals as the starting point. Landscape urbanism has been established as a discipline capable of simultaneously responding to the natural and the artificial, replacing the traditional tools of architecture in order to resolve contemporary cities’ problems. It incorporates large scale infrastructures, such as urban waste landfills, and public landscapes which are generated as the true organisational mechanism of modern day urbanism.

However, efforts to date seem to have been more directed at aesthetic aspects and we have yet to explore the political, social, economic and energetic consequences derived from waste – nor have we delved into the architectural consequences.

By assigning a new value to waste, the recovery and transformation of a landfill provides a new topography which is capable of being useful and productive for contemporary society, for leisure or for agriculture, revealing itself as a free space of the new city.

In contemporary projects, it is vital to incorporate the idea of change over time, unpredictable and programmatic indeterminacy. Only by doing this we will manage to design the landscape and establish links with the natural environment.

SM Tell us more about your participation as an invited speaker for the opening lecture in the International Workshop on Waste Architecture in Cagliari (Sardinia).

IA I had the opportunity to share one thought: It is a time where architects must definitely get involved with waste architecture. As it was said in the presentation of the Workshop, “the need to integrate waste disposal systems into an environmental planning strategy connected to the landscape and urban space requires an integrated planning activity and a multidisciplinary approach. From this perspective, the technical aspects, once the exclusive domain of environmental engineering, nowadays give rise to an interesting synergy with architecture”. Our office believes that this is the role of the contemporary architect.

Israel Alba is a spanish architect based in Madrid who obtained his Ph.D. in Architecture Summa Cum Laude in 2015 at the Escuela Técnica Superior de Arquitectura de Madrid (ETSAM) and a scholarship from Illinois Institute of Technology (IIT), Chicago, USA. Since 2007, he is an Associate Professor at the Madrid Campus for the Architecture School of Universidad Pontificia de Salamanca (UPSAM). His work has received numerous international and national prizes and awards. He has lectured on the issue of waste and possible solutions in Malaysia, Brazil, Argentina, Italy, Mexico and Spain, and has been invited to sit on architectural juries for competitions.

This work is licensed under a Creative Commons Attribution-NonCommercial-NoDerivs 3.0 Unported License.